Summer 2019 transfer deals contain some big name and here is the pick of the deals.

Romelu Lukaku
The Manchester United forward signed a five-year contract with Italian giants for a fee in the region of £73million. After losing the starting role to Marcus Rashford from the end of last season, Lukaku had been wanted to move away from Old Trafford. And now, he ended up in Milan to complete the switch.

Alex Iwobi
The attacking midfielder’s move from Arsenal to Everton is suprising. The deal could eventually cost the Toffees £35million with add-ons. Iwobi is a decent although the 23-year-old still has to gain much-needed experience both at club and international level.

Ryan Sessegnon
The 19-year-old player completed his move to Tottenham from Fulham with a deal of around £25million, potentially adding up to £30million with add-ons, plus Spurs midfielder Josh Onomah who had been linked with a move for the youngster. However, he has now played for the north London club. The teenager player struggled in the last season of Premier League on his first in the English top-flight. Still, the full-back/winger is a hot prospect. 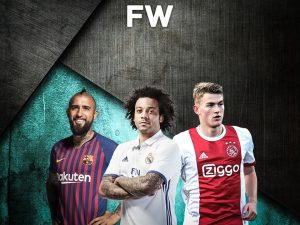 Kieran Tierney
Arsenal had been interested in Tierney for sometime now and he finally agreed to a deal of around £25million. The 24-year-old full-back has already a lot of experience playing with the Hoops and gathering winning trophies with the Scottish giants.

David Luiz
The Brazilian made a surprise move from Chelsea to Arsenal on a £8million deal. There was no sign of the move until Luiz reportedly refused to train with the Blues on Wednesday. Although, recent media reports suggest there were problems behind the scenes, claiming that the 32-year-old moved on as he would not have been well down the centre-back pecking order if he would have stayed at Stamford Bridge.

Giovani Lo Celso
The Argentinian player move to Tottenham from Real Betis on loan for an initial fee of £15million before a permanent basis next summer with further payment of around £50million. Tottenham have been tried to sign Lo Celso since he impressed at Betis last season. At that time, Lo Celso was on loan from PSG, scoring nine times and creating four succeful assists in the Spanish top-flight.