MANCHESTER UNITED have spent more money signing their current squad than nearly all their Premier League and European rivals combined.

Manchester United have endured a not so great start to the season following a below the average transfer window, despite massive investment in recent years. 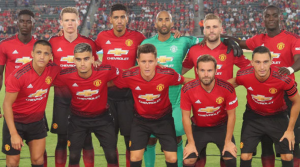 The Red Devils suffered another defeats by Brighton and Tottenham as the Old Trafford club experienced their worst began to a league season over the last 26 years.

Their stumbling domestic performance came on the back of a stressful summer which found just three new arrivals at the club.

Third-choice goalkeeper Lee Grant and reserve right-back player Diogo Dalot haven’t yet to blend in for the first team performance while £52 million midfielder Fred has failed to make contributions so far.

While the three contracts of signings represent a reserved transfer window for Man United, research shows they haven’t restored any the pennies on their investment in the current crop of players.

Journalists have calculated the total cost in transfer fees of every first-team squad across the top five clubs of the European leagues.

The data, which given the add-ons, highlights how Man United have outspent nearly the cost of all their domestic rivals combined while signing their current collection of players.

Arsenal, Chelsea and Liverpool have spent less despite they also broke their club transfer records in recent seasons.

The Gunners went bold with the signing of Alexandre Lacazette and Pierre-Emerick Aubameyang while Chelsea broke the world record for a goalkeeper when they signed Kepa Arrizabalaga.

Meanwhile, Liverpool have broken the budget for Virgil van Dijk, Alisson and Naby Keita but have still spent less than United.

However, even Man United spending are small when compared to Manchester rivals – Man City who have spent nearly €1bn on their star squad.