Vieri‘s unsettled career can be rooted back to his childhood when his family moved from Italy to Australia. Brief season in the youth teams of Marconi Stallions, Santa Lucia, and Prato before a move to Torino. Vieri made his professional debut with the Turin-based club. Between 1991 and 1997, Vieri spend less than one season at Pisa, Ravenna, Venezia, Atalanta, and Juventus. 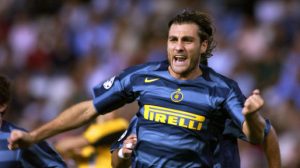 Atletico Madrid signed him in 1997 for £12.5 million which was worth for 24 goals in 24 games during his time with the Spanish side. After just one season, he moved to Serie A Lazio for €25 million after an impressive achievement in 1998 World Cup.

A world record transfer to Inter Milan for €49 million signed in the summer of 1999 which broke his record as he stayed at Inter for six seasons. Vieri was released by Inter in 2005 and moved to Inter Milan bitter rivals AC Milan. He also spent brief, forgettable single season with Monaco, Sampdoria, Atalanta, Fiorentina, and Atalanta between 2006 and 2009.

Start with a low profile, Rivaldo played for Brazilian teams such as  Paulistano, Santa Cruz, Corinthians, Mogi Mirim, and Palmeiras from 1991 to 1996. By the time he was at Palmeiras, he drew the attention of major European clubs. He moved to Deportivo just before the 1996 Olympic Games despite Parma confirming of an agreed deal with the Brazilian.

Barcelona was the club where Rivaldo spent his longest time until 2002. Mysteriously, after winning the 2002 World Cup, Rivaldo was released by new head coach Louis Van Gaal and moved to Italian giants AC Milan, but his career tailed off with one to two season at a plenty of clubs including Cruzeiro, AEK Athens, Bunyodkor, Olympiakos, Sao Paulo, Kabuscorp, and Sao Caetano before eventually coming back to his former club Mogi Mirim.